Radio: Projecting Power to the Universe -- From Chapter Three 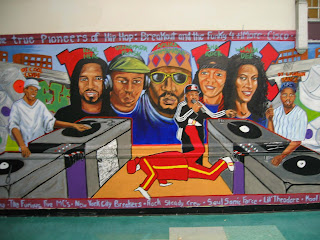 Once turned on, the radio (as a physical device) in a sense dematerializes, becoming a magical portal into boundless primitive precognitive sound-space. Like the telephone, radio can sound personal and intimate, but unlike its original wireless telegraphy predecessor (whose inventors struggled for years to make it a directional, private point-to-point medium), this is a public one-to-many “broadcast” medium. It provides the experience of group belonging, sharing not the anonymous space of a crowd, but a “consociate” community of like-minded thinkers sitting at the feet of the tribal storyteller or musician, sharing an ongoing conversation: the everyday bits of gossip, news, chants and musical sounds that define a culture. Anyone can talk on the phone, but not everyone gets on the radio. Who does get to participate in radio's group talk and music making is an issue of great social consequence. The battle over whose voices we get to hear has been part of radio's history from its inception…

Marshall McLuhan understood that radio's effect is not between the ears, but in the gut. “It comes to us,” he wrote, “ostensibly with person-to-person directness that is private and intimate, while in more urgent fact, it is really a subliminal echo chamber of magical power to touch remote and forgotten chords.” He argued that it was radio that in his words, "hotted up," the wars for independence in Africa in the 1960's. Thirty years later, it was used to incite ultra-nationalism and eventually genocidal atrocities in Bosnia, Africa and India.

In 1994, over 800,000 defenseless Tutsi civilians were slaughtered in Rwanda. The killers were led to their victims by the Hutu-controlled Radio Machete, which broadcast not only calls for cleansing the country of "the cockroaches," but the locations, license plate numbers and addresses of those targeted for extermination. While satellite television and the web are full of fundamentalist content, it is radio that calls loudest for violent Jihad in the Middle East. Radio – both over-the-air and streamed over the Internet – remains the medium of choice for rallying the faithful of every faith, using the voice to cultivate and motivate unseen – and unseeing – audiences…

On a less painful note, even as television became the dominant medium, radio continues to play its role – albeit somewhat more muted, as reflector of the dance of social power and group acceptance. In the developed world, radio became a barometer of acceptance for racial and ethnic minorities. Since the Jazz Age, succeeding generations of youth have looked to radio programming to legitimatize their cultural rebellions...

Today in the age of CD’s MP3’s, pop music ring-tones, and hip-hop music made by 'scratching' old vinyl records and “sampling” other’s songs, the power of shared sound to create group identity endures. It is this sense of belonging and oppositional autonomy that makes radio such a "hot" medium. Hip-hop emerged from the slums of the South Bronx as the voice of the dispossessed youth. Repeating “sampled” snippets of other artists' work backed up by scratches of other musicians' recording tracks played back and forth, the DJ’s background sounds played on aural media technology itself. Literally “claiming power” by stealing electricity from urban streetlights and housing project lobbies, the music culture took over the streets. These are all examples of third-chakra identity struggles: the yearning for recognition and liberation, and the tension between those in power who cherish order and discipline, and the dispossessed forces that demand to be heard.
Posted by Steven at 11:24 AM