Our always-on electronic devices have connected us to a pulsating web of information, social chatter and the possibility of endless distraction. Many writers have lamented the addictive nature of the never-ending stimuli brought to us by our smartphone apps, Facebook updates, texts and emails. In last Sunday’s (2/10) New York Times Maureen Dowd decried the “intoxicating lure” of instant electronic gratification, while Frank Bruni blamed “the Internet… and social media and cable television” for upending our belief in moderation, and replacing it with a culture of extremes— from food and diets, to sports and politics.

In Digital Dharma I discussed the “shadow side” of the Internet, digital realities and self-reinforcing online communities. In a communications environment where everyone has a voice, and multiple “truths” run free, being connected to everyone all the time can easily overwhelm our brain’s defense systems. In a world of what William Gibson described as “deliriously multiple viewpoints, shot through with misinformation, disinformation, conspiracy theories and a quotidian degree of madness,”[i] we need to cultivate the power of discernment – conscious attention and conscious inattention. In a hyper-stimulated media world, silence clears the “memory buffers.” Mind clarification must precede mind expansion. Our gullible consciousness responds to any software we put into it.[ii]

These moments of silence are the “inner firewalls” against the waves of cultural spam that threaten to inundate us. From this place of deep quiet we can begin to perceive the whole web of illusion, beyond appearances and habitual concepts, to the true state of non-duality which modulates all reality.  As media scholar Marshall McLuhan told us 60-years-ago, pay attention to the underlying medium, not the message.

Mindfulness meditation is, in effect, a process of observing the instruction codes of our consensual reality come and go, without actually downloading them and running their embedded programs of thoughts, emotions and attachments. From this place of unity consciousness, we can be both a “node on the network” and an observer of the network cloud, with all of its lightning and data storms. In earlier posts I suggested some “cyber-mediations” and offered “ambient awareness” as one way to help us with “Twitter overload.” They seem as timely today as when I first wrote them.
[i] William Gibson, “The Road to Oceana,” New York Times, June 23, 2003; (p. 100 in Digital Dharma).
[ii] Discussed in more detail in pp. 132-135 in Digital Dharma.
Posted by Steven at 2:44 PM No comments:

In my 2008 book, Digital Dharma, I wrote about tiny digital chips becoming embedded in our physical environment – from our houses to shopping malls, to our appliances, clothing and body parts – and how soon these devices would evolve from simple one-way signaling beacons to fully-interactive and addressable nodes, monitoring their internal processes and sharing their status with every other device on the net.

In this world, office machines call in service technicians before their owners are aware of any problems. Tiny sensors monitor soil and water conditions, alerting farmers when to irrigate and harvest. Similar devices embedded in bridges send wind, wave, and traffic data to the highway department… and Coke machines adjust their prices depending on supply and the current weather and traffic conditions… calling nearby delivery drivers when they need restocking. (p. 150)

In our emerging Infosphere (of what we now call “the cloud”), we are beginning to give a voice to Gaia herself. From interactive underwater observatories, connected to each other and to land-based research laboratories, to atmospheric carbon and ozone monitoring stations on the tops of mountains and deep in the forest; from dairy cows that tweet that their udders are full, to stress sensors embedded deep in the earth and in roads and bridges, data about the earth’s health now pours in from all around our environment: each adding its own small signal to our collective nervous system.

We are even giving threatened species a chance to be heard. Last Monday’s (2/4/13) New York Times had an opinion piece about how the internet has allowed us to vicariously participate in the naturalist’s work of monitoring and tracking wild animals. Writer Emily Anthes told of how thousands of people had become friends of 832F, an alpha-female grey wolf who left her protected environment in Yellowstone National Park and was shot by a hunter. She describes how wireless “tracking collars,” connected to the Internet by satellite and cellular frequencies, are being used “to track everything from tiny tropical orchid bees to blubbery, deep-diving elephant seals.”

As we learn to monitor our physical and social environments through such digital intermediaries, we will be challenged to pick inputs that represent our highest selves. What if we demand that our signaling technologies send us easy-to-understand messages about the planet’s true health as opposed to just the rise and fall of the financial markets? What if we insisted that we use this planetary ambient awareness to electronically track and share the conditions of our environment, the encroachment of the deserts, the thinning of the Ozone Layer, the decline of the ocean’s diversity? Not just the condition of our investment portfolio, but the number of malnourished children in the world? Not just status updates from “friends” we hardly know, but reports from our “adopted” whales, eagles, foxes, sea turtles, giant redwoods or the tiny mushrooms living in the soil deep in the Amazon rainforest?

I believe that as we become more comfortable with our real-time connection to the planet’s multiple voices, we will begin to see ourselves less as individual beings competing for resources, power or status, and more as one node in a joyously, noisily communicating, system. And with that system awareness, comes the chance to see in the Cloud beginnings of a paradigm shift in human consciousness: the modeling of a world where we connect not only with every other being, but through awareness of that interconnection, with the network itself: what the mystics have understood as "unity consciousness," the simultaneous knowledge of individual identity and cosmic oneness.
Posted by Steven at 2:53 PM No comments:

Book Talk Announcement in Sarasota on May 13th 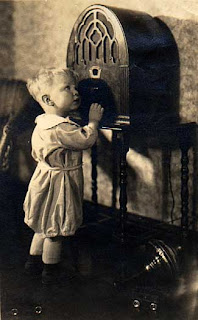 In the last decade our shared planetary nervous system has been extended, as media sage Marshal McLuhan predicted in the early 1960’s, into a global embrace. Communications networks have advanced from wires to fiber optics, from interconnected radio and television grids to a world of billions of wirelessly communicating sensory devices – each with its own address in cyberspace. Our collective systems for sharing thought have undergone the most rapid change in human history, affecting our mental, psychological, and etheric bodies.

The electronic media amplify, distort and attenuate our senses, change our awareness, and “mediate” our experiences. But from a mystical perspective, everything we have created in cyberspace holds a lesson for our spiritual unfolding. The Infosphere is the new environment through which humanity must now play out its evolutionary challenges. If the universe itself, as many philosophers tell us, is a field, not just of matter, but also of information, then the Infosphere must hold in its microcosm all levels of human experience: all knowledge, all our dramas of politics and power, and all our dreams. This knowledge is encoded in our ubiquitous systems of telecommunications, and yet because it is so omnipresent, to most of us it is still invisible.

Based on his book Digital Dharma, Steven Vedro’s multimedia presentation will introduce the core communications metaphors of each of the seven levels of consciousness. Join Steven for a challenging and entertaining exploration of the developmental metaphors of light and shadow in our cellphone and texting mania, the impossibility of finding the truth over the internet, the challenge of deep-seeing brought to us by digital compression, and the glimpses of field awareness inherent in evolving social media and “cloud consciousness.” 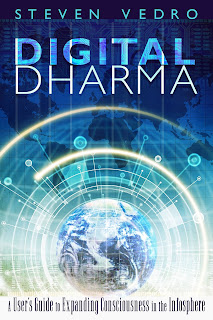 Posted by Steven at 1:07 PM No comments: