Pervasive Computing, Aliveness in the Divine -- From Chapter Seven

Fifth-level digital dharma asks us to confront the vulnerability of network interdependence: one is part of the Grid, but always a bit susceptible in an environment beyond one’s control. At the seventh-level, we are asked to live as if we are connected in all dimensions: horizontally to our families and our communities, and vertically to our common earth at one pole, and our spiritual vision at the other. At this level of the Infosphere, all devices know where they are, monitor their internal processes, go out on the web for information, and routinely talk to each other.

Jerry Kang and Dana Cuff, at UCLA’s Institute for Pervasive Computing and Society, describe this as the emergence of "PerC" – or pervasive computing, “when the Internet gets ubiquitous, embedded and animated." Like earlier anxieties over telecommunications, there is much to fear in unrestricted, ego- and capital-driven implementations of seventh-level technologies. We saw it in the doomsday “Y2K” scenarios and the beliefs by some that UPC barcodes are “marks of the Beast.” But like all human creation, the Infosphere also holds a more positive vision of expanded consciousness: PerC mimics in silicon and radio waves a world where we are Witness, Creator and Creation. A world where we effortlessly download from the “divine treasury” the entire wisdom of the quantum universe, and the knowledge of how to use it; in which the spiritual and the mundane are not so far apart... A number of media artists are already bringing into concrete reality core seventh level concepts. Some are experimenting with humorous ways that communications devices can cooperatively affect community space:

The Chaos Computer Club, a community of German hackers with a predilection for public art transformed a building in Berlin into a giant computer screen by making offices on the top eight floors light up like individual pixels. A computer controlled lights in each room to produce a matrix of 18x8 pixels based on received SMS messages. Blinkenlights, as the installation was called, allowed people to send in messages, post animations and play Pong. 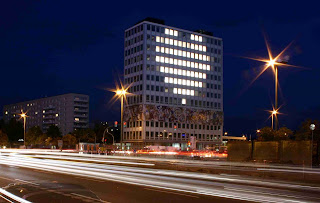 In the U.K., SkyEar sent a cloud of helium balloons and cellphones up into the sky. Users could listen to the sky’s electromagnetic sounds, and by “calling the cloud,” they could also modify its environment and cause variations in brightness and color. Beyond these playful uses of signaling technologies, I see the expression in the cultural sphere a quality of awe and wonder at consciousness networking itself: each node of individuality bringing forth a unique story (karma) by its own actions, and simultaneously creating new stories by its relation to every other being.

An early expression of beauty created through the act of networking was Umbrella.net , where ten participants carried Bluetooth-equipped umbrellas with accompanying PDAs running networking software. The umbrellas were illuminated by LEDs that pulsed red when searching for others, blue when connected, and flashed when the participants were sending (or relaying) text messages between themselves.

To me, these artists are using the tools of seventh-level telecommunications to show us in chips and wireless nodes a concrete expression of what Sri Aurobindo called the next stage of human development: “infinite consciousness throwing up forms of self-expression, but aware always of its unbound infinity and universality.” Our seventh level dharma: tikkun olam, repairing the net as “self-healing” nodes of intelligence fully engaged in the dance of human and planetary relationship.
Posted by Steven at 12:18 PM

A more "prosaic" example of group intelligence is a new traffic info system that combines GPS, traffic info, and the realtime experience of other drivers on the same road. See: http://www.nytimes.com/2007/10/18/technology/circuits/18basics.html?_r=1&ref=circuits&oref=slogin

Another example of pervasive wireless computing is a prototype shirt that has intelligent sensors for the wearer's vital signs, allowing it to call for help via Wi-Fi or cellphone link.

The Dec 5, 2007 "Circuits" section of the NY Times features a number of stories about GPS-enabled cellphones and other devices, connecting the seventh domain to the hunger of the first -- not to be "lost."

While 6th level awareness is about "seeing the codes," at the seventh level we hold all the versions of reality in consciousness. If the MATRIX movies were about the 6th level, then perhaps VANTAGE POINT is a hint of the 7th: seeing the patterns emerge from chaos. David Denby, in his NEW YORKER review (3/3/08) calls this an attempt to show "the secret and idiosyncratic patterns with chaos, the singular currents running through the tumultuous sea."

In Chapter 7 I reference "grid computing" as a model for "universal abundance," where the grid holds all intelligence and all resources. Where the "secret" is learning how to "request" (Download) the appropriate application.

I see this expanding in the emergence of "cloud computing" -- where all is connected by the Internet, and services reside everywher.

Another step towards Pervasive Computing (PerC) is Microsoft's commercialization of a "tabletop" computer interface. Soon we will see intelligent walls and floors!